In Rust: The Longest War, Jonathan Waldman claims that, for those who “yield to rust, find beauty in rust, capitalize on rust, raise awareness of rust, and teach about rust, work is riddled with scams, lawsuits, turf battles, and unwelcome oversight. Explosions, collisions, arrests, threats, and insults abound.”  Rust is the underside of cosmopolis. Rust belts follow industry and its corrosions; the parasitic Rust fungi are enemies of agriculture. And yet there is an irenic side to rust: it inspires contemplation, the search for beauty, and the effort to defend what is threatened. As an agent of time, rust sponsors stories of collapse-and-recovery, evolution-and-extinction, but it also questions them. Narratives of progress that see rust as the enemy are not universal. In Japanese aesthetics, for instance, sabi is the beauty of natural aging and aged materials; what is new is not as lovely as what has weathered. In a time obsessed by environmental apocalypse, rust may reveal other trajectories for cultures of recovery. Resurget Cineribus, “It Will Rise from the Ashes,” is the motto of Detroit—our host city.

Long associated with steel, car culture, and the music of Motown, Detroit is also a site of struggle for racial and environmental justice, against depopulation and “ruin porn,” and for the preservation of artistic heritage. A nexus of encounters between indigenous nations and the French fur trade, it became a locus of the Great Migration, “white flight,” and gentrification. Water-rich on the strait between Lake Huron and Lake Erie, Detroit and its neighbors struggle against corroded infrastructure and government corruption. For all those reasons, Detroit is an ideal place to confer about rust, resistance, and recovery. We invite participants to interpret the conference theme as broadly as possible and to imagine their work in terms of content and  form. We particularly encourage non-traditional modes of presentation, including hybrid, performative and collaborative works; panels that minimize formal presentation in favor of engaged emergent discussion; interdisciplinary approaches; environmentally inflected readings of fiction, poetry, creative nonfiction, film, theatre and other media; and proposals from outside the academic humanities, including submissions from artists, writers, teachers, practitioners, activists and colleagues in the social and natural sciences. Topics may include, but are certainly not limited to:

*  Transnational rust: Detroit and its relationship with Ontario; the borderlands of Canada and the United States; nationalist and cosmopolitan rusts; colonial, postcolonial, and decolonial rusts.

*  Elemental rust: Rust as an element of nature writing, natural history, agrarian and wilderness literature. The nature of iron and the arts of steel; water as an agent of rust;  rust as vitality, materiality, and quintessence; corrosion as hyper-object; mines, foundries, and factories; nuclear rust; rust and oil, coal, and natural gas;  Rust as programming language; rust as the essence of the Internet; the Internet of (Rusty) Things; steampunk aesthetics; rust as waste of civilization.

*  Recovering past and future: Ends of environmental history; paradises born in hell; the place of the Roman and other empires in declensionist narratives; linguistic recoveries; neo-medievalisms; fantasy fiction as imagined past; science fiction as extrapolation; queer futurities; archaeology and anthropology in the environmental humanities; the corrosion and recovery of literary history.

Subscribe to ASLEC-ANZ Newsletter Be the first to know about upcoming conferences, latest international events and ASLEC-ANZ news. 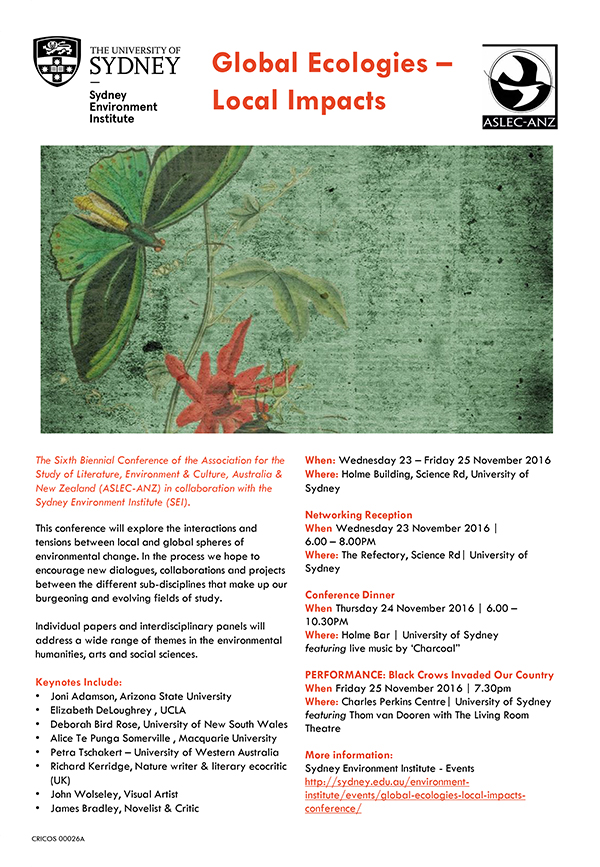